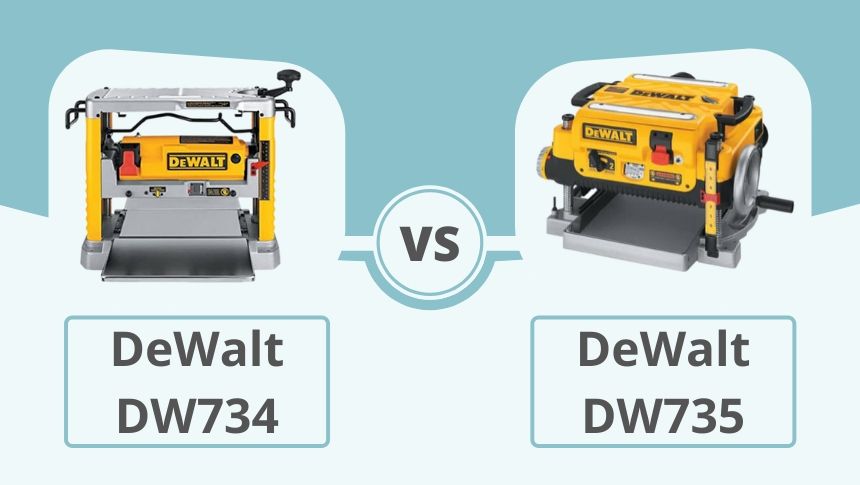 Wood planers, while extremely useful, are some of the more expensive pieces of woodworking equipment to purchase. This is why it is recommended that you, as a user, perform due research before committing to a specific planer.

Since DeWalt is one of the most popular professional-grade manufacturers of woodworking equipment, it is no surprise that they offer a range of products intended specifically for planing wood.

In this DeWalt DW734 vs DW735 guide, we will be talking at length about two of their planers (namely the DeWalt DW734 and the DeWalt DW735 wood planers). We will be comparing and contrasting their features so that you can decide which one fits your wood planing needs best. 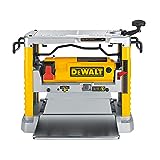 The DeWalt DW734 Benchtop Planer operates on one single speed setting of 96 cuts per inch at 10,000RPM. This planer has a width capacity of 12.5 inches, a depth capacity of 6 inches, and provides a maximum depth of cut of ⅛ of an inch.

And the four steel columns at each corner of the planer allow the user to adjust the height of the cutter head. This can be adjusted using a ‘crank’ at the top of the machine. A scale on the side indicates the height you have adjusted the cutter head to accommodate.

Also, a mobile wheel on the side allows the user to adjust how much of the wood needs to be planed. That is, the planer will stop after having planed down to a specified depth.

One very useful aspect of this planer is that you can ‘lock’ it in place before planing, which virtually eliminates snipe. The lengthy infeed and outfeed tables also provide material support of 33.5 inches.

Moreover, the DeWalt DW734 comes with a magnetic hammer-shaped key, which makes replacing knives extremely convenient. It makes it so that the user does not need to take the risk of touching the knives at all while replacing because the magnet makes it so easy for the knives to just pop in and out. 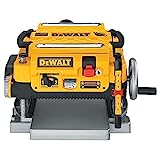 This, of course, is the successor to the DeWalt DW734. It is heavier than its predecessor by 12 pounds (at 92 pounds), requiring the help of two people to lift and carry it, but its motor operates at the same 15AMP, 20,000RPM.

It has a maximum cut depth of ⅛ of an inch, a depth capacity of 6 inches, and a width capacity of 13 inches. The DW735 has two-speed settings of 96 cuts per inch and 179 cuts per inch. This gear shift can only take place while the planer is working, though. It also comes with an automatic carriage lock, minimizing snipe.

Also, this comes with a three-knife cutter-head with the advantage of the knives being reversible and replaceable. Again, no sharpening of knives is required. A scale at the front of the machine also displays how much you are taking off of the wood, and of course, that itself is adjustable using a wheel on the side of the planer.

The magnetic ‘hammer’ that the planer comes with allows you to unscrew the top components to get to the blades, and also pick up the blades without having to touch them while reversing or replacing them.

Do They Have Similarities?

While their model numbers are only off by one digit, there are some significant differences between the DeWalt DW734 and the DeWalt DW735. But we will get to that later on. First, let us take a look at how these two planers are quite like one another.

Both of these machines are wood planers, which are part of DeWalt’s line of planers. They have the same color scheme of yellow, black, gray, and some small components in red-orange. Both come with a 3-year limited warranty.

The two also come with a total of 33.5 inches of support for wood due to their foldable infeed and outfeed tables.

The two planers give you the option of reversing or replacing the knives/blades once they wear off, so there is no need for sharpening them. Both the planers come with a three-knife cutter-head. They both feature 15AMP, 20,000RPM motors, which are as powerful as you can get to work with a regular 120V household circuit.

With both of these wood planers, you can adjust the height of the opening to match that of the wood you are planing, as well as customize exactly how much you want to take off of the wood.

Both the DW734 and DW735 are professional-grade wood planers, and hence, can be expected to be easier to use, long-lasting, and more versatile than cheaper options on the market. This also means that they are more durable and can handle much more woodworking than the average wood planer.

These two planers also feature a four-column carriage lock, which ensures that irregularities such as snipe are reduced to a minimum. So, once you lock it in place, you virtually have to have no worries about manually fixing a snipe.

One would be wrong to assume that just because both these wood planers come from the same manufacturer and from the same line of products, that they are interchangeable. In fact, whether one of these will suit your woodworking needs better than the other is something that requires some looking into.

As mentioned above, the DW734 weighs 80 pounds while the DW735 weighs 92 pounds. This is why the former is advertised as being portable, while it is advised that the labor of two persons be used for lifting and carrying the DW735. Needless to say, the DW735 is also larger in size than the DW734.

One of the major differences between the two models is that the DW734 comes with only one setting, which allows it to operate at a rate of 96 cuts per inch, while the speed of the DW735 can be switched between 96 cuts per inch and 179 cuts per inch. However, this switch is only possible while the machine is running.

The 179 cuts per inch are used when a finer finish is required, and the 96 cuts per inch setting are faster and take off more of the wood stock. And the latter setting is faster than the former setting as well.

While the two wood planers have the same maximum depth of cut (upto ⅛ of an inch) and depth capacity (of 6 inches), they differ in terms of their respective width capacities.

One of the things that make these two of the best wood planers on the market is that they minimize the amount of snipe on wood. This means that you’ll have an evenly planed surface from the get-go, without having to spend time to even out the snipe on the ends of the piece of wood.

The carriage lock systems on these machines allow this to happen. So, while the DW734 has a lever that you can turn to lock it in place, the DW735 has an automatic carriage lock. Both perform the same essential task of eliminating snipe.

A dust collection hood accompanies the DW734. If left on its own, the chips of wood will simply fly out through the pipe-like opening and all over the floor of your workplace. That is why attaching a vacuum cleaner to the hood will ensure a much cleaner and more manageable working area.

The DW735 comes with a special chip ejection system that breaks down the wood shavings into smaller chips. This system is so powerful that if hooked up to a vacuum cleaner, the cleaner itself does not need to be turned on. The system is capable of pushing it out through the pipe and into the dust collection unit.

Needless to say, a person should not stand in the way of the chip ejector (if it is not attached to a vacuum hose) to avoid being injured.

However, this can be avoided by adding an angled extension to the DW735 chip ejector.


With the above information, hopefully, it would now be easier for anyone deciding between the DeWalt DW734 and DW735 wood planers to choose one.

Both machines are on the higher end of the price spectrum, with the DW735 being the more expensive of the two. This, of course, is owing to its wider capacity, heavier weight, and more powerful debris management.

Whether or not these advancements from the DW734 justify the price difference is solely up to the individual buyer. After all, both the machines do the job of planing wood, along with making sure that a woodworker does not have to spend extra time fixing snipe.

The thing that is for certain is that both the DeWalt DW734 and the DW735 are trustworthy, reputed, and professional-grade wood planers which will deliver a lengthy service.

Different Types Of Chisels & Their Uses 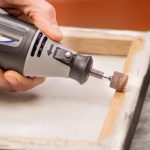 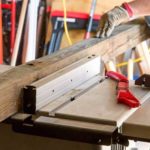 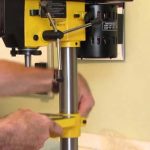 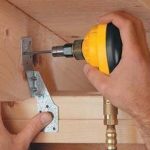 How to Use a Palm Nailer? The Definitive Guide

TheToolsGuide.com is a participant in the Amazon Services LLC Associates Program, an affiliate advertising program designed to provide a means for sites to earn advertising fees by advertising and linking to Amazon.com